Is the Mediterranean Sea in danger?

The Mediterranean Sea seems to be threatened by many factors, as the hydrocarbons exploitation or the intense urbanisation of the coastline. This is what demonstrates the MedTrends report (2015) in an article entitled “The Mediterranean at a crossroads: the Far West or the sustainable development” (in French). It has been published last January 19th by WWF France, the Fonds mondial pour la nature.

An alarming situation
Marine transport, tourism, aquaculture or hydrocarbons exploitation, the Mediterranean, which is more than requested, is today close to the burnout. Since many years, hydrocarbons projects and drilling activities multiply. According to WWF France, contracts of offshore oil and gas exploration are about more than 20% of the Mediterranean basin, and it appears unlikely to improve. In this way, as director of WWF France Pascal Canfin maintains: “From now to 2025-2030, the Mediterranean will be 40% opened to hydrocarbons exploration”. As for the offshore gas production, it could be multiply by 5 between 2010 and 2030, according to the foundation. 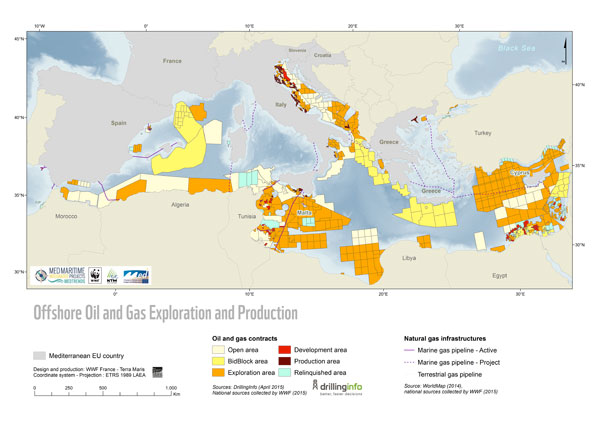 Marine economy involved
Furthermore, all traditional sectors of marine economy, as transport or aquaculture will quickly develop and must keep their growth up during the next twenty years, which will cause further pollution. “The marine traffic will be multiply by two, whereas more than 500 million tourists will abound in artificial coastlines on extra thousands of kilometres.” proclaims the foundation’s director. The NGO also anticipates an expansion of the mining in the seafloor, threatening ecosystems already damaged and endangered species.

To avoid this burnout, the Foundation advocates the creation of marine protected areas beyond the territorial waters, the regulation of marine traffic and the setting up of anti-collision measures for the cetaceans. As a reminder, European Union set the goal of a return to a good ecological status of the European marine waters by 2020 at the latest.

Know more about the 2015 MedTrends report.