Thanks to Hop! Biodiversity: airports prove to be nature reserves

When you think airports, you think concrete, and birds which risk to be trapped in the jet engine… Did you know that an airport represent about 70% of greens, almost all of them being meadows and various local eco-system? HOP!, subsidiary of the Air France group, joined forces with scientists from the National Museum of Natural History and academics, in order to set up a study of fauna and flora in these preserved areas, which can be describe as last big meadows of Europe. These areas have been preserved from intensive farming, which explain the richness of their biodiversity.

4 test areas in France
Lionel Guérin, managing director of HOP!, entrusted to doctor Roland and Julia Seitre (biodiversity specialists), an environmental study on 4 airports in France: Castres-Mazamet, Paris Orly, Metz-Nancy-Lorraine and Perpignan. The aim of these researches is to identify the different species which live in these natural meadows, and to preserve them in raising awareness among the airports’ staff. In this way, the two researchers could numbered numerous species of butterflies, orchids and birds, especially tree sparrows, skylarks, wagtails and insects pollinators like solitary bees. 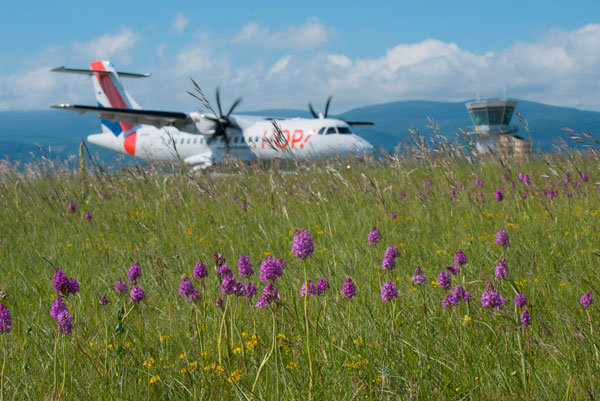 A project approved by the scientific sphere
As François Bouvier said (Honorary Attaché at National Museum of Natural History and president of HOP! scientific committee): “A participant of the air transport initiated an innovative and virtuous approach which enables to take a fresh look at the way to human activities can coexist with their environment and preserve it. According to the biodiversity, airports are nature environments much more open that we could think, and can have a positive role on their environment.” An approach also approved by the Green Hotels Paris.

Know more about the HOP! Biodiversity Project (in French).