Paris is to double its number of bicycle paths by 2020

On the morning of April 14th 2015, the "Plan vélo 2015-2020" (Parisian bike plan) was unanimously adopted by the Council of Paris. Presented by the Deputy Mayor for transport, Christophe Najdovski, this plan includes a 150 million-euro investment aiming to double the length of bicycle paths in Paris by 2020. A new "Réseau express vélo" (network of express ways for bikes) of paths entirely dedicated to cyclists will be organized around three different axes: North-South, East-West and Stalingrad-Bassin de l'Arsenal. Out of these 150 millions, around 100 will be dedicated to the arrangement of paths and the rest will be divided between the installation of 10,000 new parking spaces for bicycles, the buying of electric bikes and mopeds and the "Paris à 30km/h" program, which consists in the creation of contraflow lanes of 30km streets in Paris. In association with the RATP group, the Stif and the SNCF, the Ville de Paris also considers the creation of new secured parking spaces for bicycles called "Véligo" (a locked space sheltering bicycles to be opened by holders of the Navigo Pass only) in the RER stations and streetcar and subway connections terminus. Finally, a new Vélib' électrique (electric bikes) service may also be implemented in 2017. With over 283,000 members in 2014, the Parisian bike self-service system has a bright future ahead! 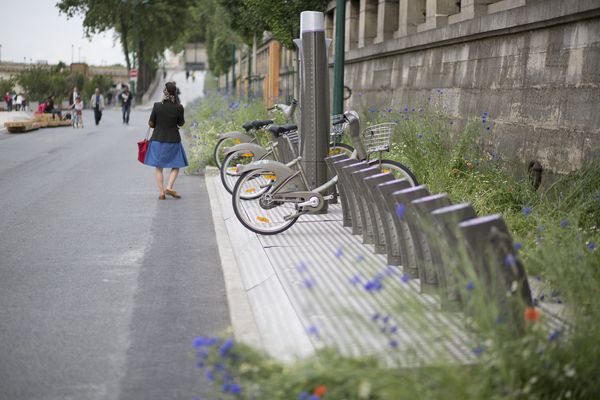