Roland-Garros in the City at the foot of the Eiffel Tower!

From May 24th to June 7th 2015, tennis lovers will also be able to experience Roland-Garros at the foot of the Eiffel Tower since, for the first time this year, the “Roland-Garros in the City” event is relocating, leaving the square of the Parisian Hôtel de Ville to settle in the Champ de Mars! This operation allows those unable to procure the highly coveted tickets to the legendary Philippe Chatrier and Suzanne Lenglen courts to view the Grand Slam tournament in a friendly atmosphere at the heart of the capital. A clay court, a “Sponsors” Village, a Roland-Garros shop or even, a giant screen will be set up in the Champ de Mars. In addition to being able to watch the matches, tennis lovers will discover the Roland-Garros and Lacoste collection, since the famous crocodile brand is planning on hosting well-known ambassadors to promote it. The “Longines Future Tennis Aces” tournament, strictly for 16 hand-picked female players aged 12 or younger and coming from all over the world, will take place from May 29th to May 31st 2015 at the foot of Paris’ most famous iron lattice tower. Finally, GDF SUEZ, one of the tournament’s official partners, will welcome the visitors at its interactive booth, presenting the various renewable energy sources, as well as concerns regarding energy. 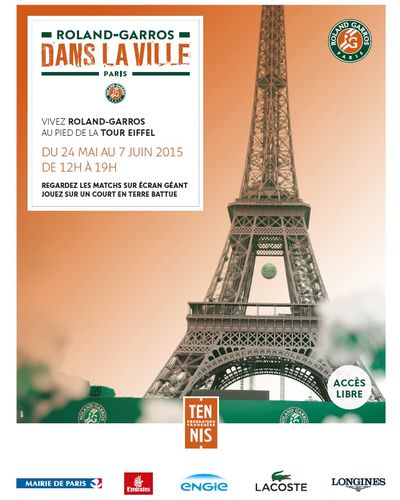