For their 38th edition held from the 5th to the 8th of April, 2018, the Puces du Design changed their name and became the “Modern & Vintage Design Fair Paris”. Created in 1999 by Fabien Bonillo, this event is the unmissable meeting point of contemporary design aficionados. 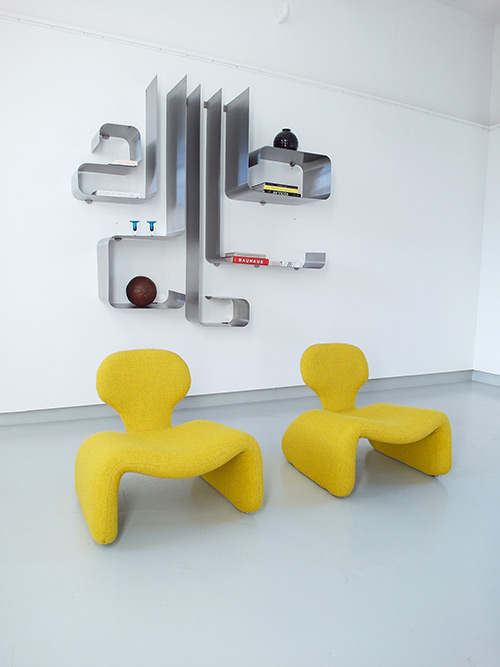 Olivier Mourgue: the fair’s guest of honour
This year, the festival pays tribute to the French designer Olivier Mourgue (1939-), mainly known for creating in 1965, the Djinn chairs, a collection of futuristic and very light seats. Those models made of polyurethane foam were used in Stanley Kubrick’s movie “2001: A Space Odyssey” (1968), which celebrates this year its 50th anniversary. In partnership with the Galerie du 20e Siècle of Poitiers, and the French antique dealer Jean-Yves Allemand, the Design Fair Paris will display numerous works of Olivier Mourgue. Among them, the entire famous Djinn series, including fireside chairs, sofas, loungers, coffee tables, etc. The fair will also present some of the creator’s lesser-known compositions, such as the Whist Airborne chairs (1964), or even the Montréal series (1967), designed by the artist for the French Pavillon of the Universal exhibition of 1967, held in Montréal, in Canada. It’s the perfect opportunity to discover (or rediscover) some unique and revolutionary pieces of one of the 20th-century design pioneers, as well as many other young contemporary designers.

VeggieWorld: the vegan trade fair is back this October in Paris
17th edition of Salon Naturally at the Porte de Versailles of Paris
5th edition of the vegan fair VeggieWorld at the Centquatre
The salon Vivre Autrement 2018 edition celebrates the “zero waste” lifestyle
Destinations Nature: the fair dedicated to outdoor sports and ecotourism
Vivez Nature fair: the 1st 2018 meeting dedicated to well-being