Since 2002, Paris Bike Tour offers a mean to visit Paris differently... by bike! These off-tracks tours are escorted by professional guides and allow visitors to follow unusual trails, unknown from tourists. Various tours are available to visit Paris by bike and admire the capital from a different angle. The first one, “Paris en Seine” takes the one-day cyclists along the banks of the Seine, which were designated UNESCO World Heritage Site in 1991. The first half is carried out on the right bank, and the other on the left bank, which allows for tourists (or Parisians) to discover the Pont des Arts, the Pont Alexandre III or the Musée d’Orsay. The second trail, called “Paris Eternel”, takes the sporty cyclists through the historic area of Le Marais from a new perspective. The Centre Pompidou, the Stravinsky Fountain, the Place des Vosges and the Colonnes de Buren are all visited in this arty excursion! Finally, the third and last tour is intended for the food lovers, who come to Paris to know more about French cuisine. With “Paris Tasting”, you will be invited to taste produce from the oldest farmer's market in the capital. Coffee, croissants, cooked meats and various cheeses are all within your reach! 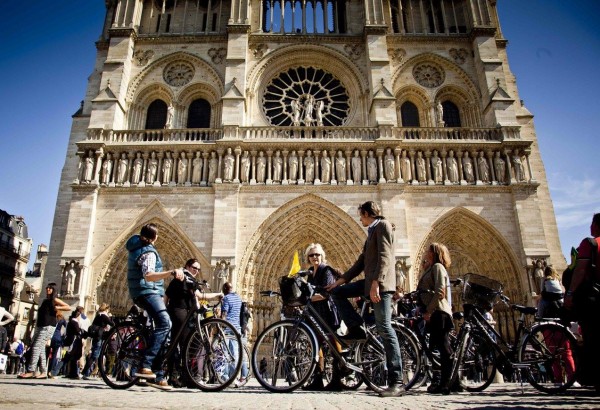