Since February 4th, you can discover the adventures of Yellowbird (Gus in French), a small non-migratory wading bird who has to lead a flock of birds to Africa. “Yellowbird” invites us to follow the migration, which seals the fate of millions of birds each year. This animated film directed by Christian de Vita offers a reflection about the impact of human actions on Nature and animals. Indeed, hunting, poaching, climate change, high-tension lines, and wetland loss (ponds and marshes) are responsible for the death of thousands of birds. The crew of the movie was helped by the ornithologist Guilhem Lesaffre – vice-president of the Ornithological Centre of Ile-de-France – for the visual development and morphology of the birds (their behaviour, the feathers layout, how they fly, etc.). This movie, which will enchant children of all ages, shows how important it is to preserve the environment and to create resting areas for migrating birds.

Did you know? The film’s soundtrack was composed by Stephen Warbeck, who also wrote that of Billy Elliot and Polisse. Arthur Dupont, Sara Forestier and Bruno Salomone voice the main characters. 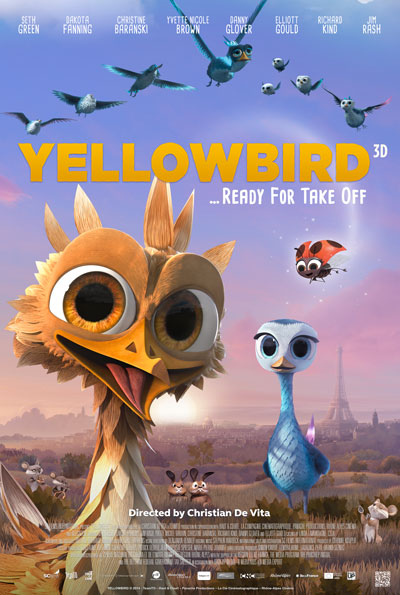